The film starts with a person taking a delicious sandwich off a plate and wrapping it in a brightly patterned Honeywrap cloth. A slogan on screen reads ‘Dream it. Do it. Own it.

On screen we can see a central suburbs view in Auckland. The shot drops down to a single house, where this home business is based.

“Registering our intellectual property has given us confidence” says Jo.

Tara says “A friend advised us to register it right from the beginning. So we looked online to check whether there was existing companies”. We see Tara taking a delivery at the front door and carrying it into the house and through to the studio at the back. In through the front door of the studio there is a well set up work space. We see an attractive web site on a laptop screen, also Honeywrap patterns being sorted and staff at work.

Tara says “We spoke with a friend who was an IP lawyer about the name and to see if there was going to be any complications.”

Jo says “We registered our word mark and our logo with The Intellectual Property Office of New Zealand."

We see Tara and Jo back in the kitchen. Tara says “The light bulb moment for me was when my five-year-old son made a beeswax wrap at school. He bought it home and I showed Jo and Amy. They immediately saw that it was a product that could make a difference.”

We see blocks of beeswax being melted in an electric pan in slow motion, and cotton cloth squares being dipped into it to give them a wax coating.

“We were all health professionals by background, so it was that it had a purpose and could do good. Jo was on a Plunket committee and was doing a market day, two weeks after we had the idea. A friend whipped up packaging.”

We see a range of Honeywrap packaging on screen.

Jo says “We were up until midnight for a week making Honeywraps, not knowing if anyone was going to buy them at this market. And they sold out! We were like whoa, we’re on to something.”

You can see production going on with close-up shots of cutting Honeywrap squares and loading rolls of patterned fabric onto rollers.

“We contact artists and ask if they are keen to collaborate with us. We purchase the rights to use artists’ designs and that makes our Honeywraps look amazing.”

Jo and Tara are sorting and reviewing patterns in the studio. They have a large spread of different designs on a wooden work table.

Tara says “We sell online and we sell to about 250 stockists throughout New Zealand. We also sell in some countries overseas.

Jo says “When I see Honeywrap at a park or a beach, I feel really satisfied.

Tara says “Our overriding goal is to provide a solution to plastic in our oceans.”

The film finishes with a close up of a forest-patterned Honeywrap and the slogan “Own your no plastic idea,” before fading to the Intellectual Property Office of New Zealand logo and web address www.iponz.govt.nz.

The beeswax smell, the softness of the wraps in your hands – that’s all part of the brand experience.

In 2013, people were talking about the need for alternatives to disposable plastics, but Tara Strahan and friends Jo Falloon and Amy DeMuth decided to do something about it.

Inspiration had arrived in the form of a school project by Tara’s five-year-old son: a reusable food wrap made of strawberry-print fabric and beeswax. Tara invited Jo and Amy around for a glass of wine, and pitched the wrap as a business idea. The friends saw the potential straight away.

To be sure the idea was viable, Jo suggested they trial the wraps at a local craft market. “We madly got some fabric and made wraps out of beeswax, and got a designer friend to knock-up a little wrapper,” Tara says. “There was such a good response at the market that we decided to put some real effort into it. It snowballed from there.”

Five years on, Honeywrap is not only sold nationwide but also in the USA, Japan, Switzerland and the United Kingdom and the team can hardly keep up with demand. Turning a good idea into a great one

Honeywrap marry form and function superbly. Beautifully patterned, beeswax-mixcoated fabrics (available in different sizes) soften with the heat of your hands. Mould them to cover containers, or wrap up sandwiches, cheeses and other food items. Honeywraps also work well in the fridge as the beeswax blend hardens in the fridge, creating a seal. When they need to be cleaned, cold water and mild detergent will do the trick.

There are two secrets to the product working well: the special resin/beeswax mix, and the consistency with which it’s applied to the fabric. Perfecting the beeswax blend took six months of trial and error, Tara says. “We bought different oils and tree resins and beeswax, and then mixed them at the kitchen bench trying different ratios.” It felt like a 5th form science project using trial and error to work it out.

To melt the beeswax blend onto the fabrics, they stuck with a home-based approach, starting with an oven then moving to a frying pan. “Then we bought a grill, same as you get in a chippy store or burger store,” Tara says. “For the first two years we were making them just like that!”

To scale up production as Honeywrap’s popularity grew, they bought a laminator off Trade Me and re-engineered it to apply the resin as they fed fabric through. But even that wasn’t enough to keep pace with demand.

“We eventually worked with some engineers to build a special machine to put on wax,” Tara says. The wraps are still manufactured out of Tara’s home. Most of the process is still all done by hand but the machine for applying the wax mix means they can produce them in higher volumes, while also improving the quality. “It’s a repeatable product, whereas applying wax by hand we’d get more variation in the results.”

On top of ensuring consistent product quality, Honeywrap have built a strong following by walking the talk with their environmental values.

The team aren’t concerned only with reducing plastic waste. “In everything that we do, we try to reduce our impact on the environment,” Tara says. This promise means sourcing certified organic cotton, using non-toxic ingredients in the resin and inks, and using recycled cardboard in their packaging.

The visual appeal and quality of the wraps also serve a larger environmental goal. “Our whole thing is that we try and encourage people to buy beautiful products that are functional and also good for the environment.We collaborate with like minded charities such as Sustainable Coastlines and Project Jonah to increase awareness for their cause and environmental issues. A donation is made to the charity with each wrap sold.”

As a creative point of distinction, Honeywrap commission New Zealand artists to produce their fabric patterns. Their first collaboration was with Auckland-based artist Flox, whose work focuses on native birds and flora. “She’s always keen to get her brand out there, and she was keen to work with us as a brand that’s eco-friendly and matched her ethos,” Tara says. 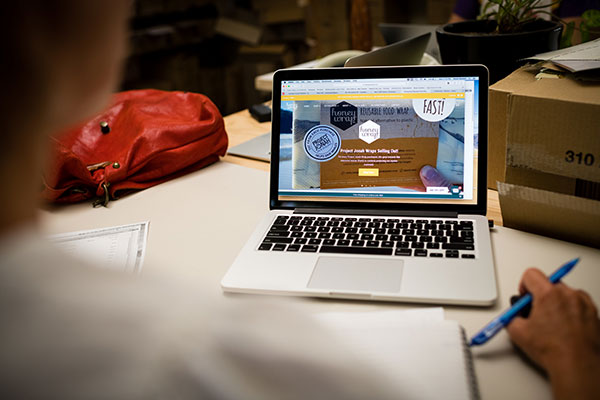 The strength of the team’s environmental brand, and their approach to marrying form and function, has paid off. “Once people start using the wraps, they realise it’s an easy way to make a change and actually make a small difference,” Tara says. The enthusiasm catches, as friends convert friends. “It’s great at markets when people come over and explain to their friends how Honeywrap works, what you use it for, and how much they love them.”

The team recognised early on that any word-of-mouth would only be valuable so long as their brand name was protected. Before setting up the business, they checked that ‘Honeywrap’ was available as a company name, as a website domain, and as a trademark.

After consulting a friend who was an intellectual property lawyer, they registered ‘Honeywrap’ as a word mark, and their logo as a combined mark, through the Intellectual Property Office of New Zealand. Their word mark prevents competitors in New Zealand from using the same word in relation to similar products, while the combined mark (“combined” meaning image plus text) specifically protects their logo.

Honeywrap publish videos and photos on their website, to show off the visual appeal of the wraps and demonstrate their function and care to potential customers. On publication the owners of this imagery automatically obtain rights by virtue of copyright law in New Zealand. Though Honeywrap are responsible for safeguarding its use by others, they take a generous approach.

“We encourage our stockists to use our images,” Tara explains. “If they want to do a promotion on Facebook, or run a story or feature on their website, then they’re representing our brand too. We would rather they have beautiful images and have access to those.”

To produce delightful fabric patterns, Honeywrap commissions designs – creative IP - from artists. The payments to artists range from up front payment, to percentage of sales, through to payment in Honeywrap product. Through these licensing arrangements, Honeywrap have rights to use the artwork and benefit from it commercially, while the artists retain the ‘moral right’ to be recognised as the creators.

Honeywrap proudly host artist profiles on their website. “It’s a two-way thing. They’re helping us out and we hope to help them out too,” Tara says. “We’re not artists or designers, so it’s great they can come up with beautiful fabrics that people love. We’re happy to give them a shout out.” Honeywrap does away with disposable plastic food wrapping.

Building a buzz around the brand

Five years on from launching, the team has grown bigger than Tara, Jo and Amy. They now have two additional full-time staff, plus a few part-time staff. Everyone plays their part in protecting the resin recipe and the specifics of the manufacturing process as commercially sensitive trade secrets. Casual workers and visitors must also sign a non-disclosure agreement before they’re shown any production processes.

They’re secrets worth keeping, with Honeywrap’s consistently high quality being a major factor in new stores asking to stock the brand. “Since the beginning, we haven’t actually gone out and actively sought stockists,” Tara says. “It’s usually people coming to us.”

It’s no surprise that, while Honeywraps sell well online, the majority of purchases are made in-store. “It’s a product that people really want to touch and feel and see how it works,” Tara says. “The beeswax smell, the softness of the wraps in your hands – that’s all part of the brand experience.”

The team push this point and encourage stockists to become Honeywrap ambassadors. “We want everyone in a store to use Honeywraps. When we send out orders, we include Honeywraps for the staff to try. If they know how it works and they believe in it, it’s easier for them to sell the product to customers.”

With both stockists and customers having nothing but sweet things to say, the team are once again looking at ways to scale up production. For now though, Tara’s home looks set to remain a busy hive of activity.