Slow mood music plays. The film opens with close up views of grape vines in Martinborough, New Zealand, and then sweeps up to show a view of the Martinborough township.

We see a plain shop front on a Martinborough Street. Then the camera moves through the door into a large studio with wallpapers samples on the walls and various screen printing tools and resources.

The narrator says “Hi, my name is Ben Masters. I’m a co-founder of PaperHands. The idea for the business came when we were looking for wallpaper for our own house.”

The film shows a spatula mixing brightly coloured ink in a small container. We see Ben laying out a sheet of blank paper stock, setting up a screen and applying patterns.

“When we started PaperHands, we weren’t sure if it was something that would work.”

“We gave ourselves a couple of years to see if it would succeed, before we registered our trade mark.”

The film shows a finished pattern on a roll of paper, it’s in layered tones of grey on a black background.

“The difference between hand made and machine made paper – I guess you do get a certain amount of variance and expression in the hand made wallpaper. I guess you have the opportunity to be different, to create different stuff. To take a chance.

The film shows Ben working at an illuminated drafting table, he is adding to a large drawing of a New Zealand bush scene.

“We set up in Martinborough because we live here.”

“A break through moment for us was when Urbis named us in their December issue as the best wallpaper of the year.”

The film shows stacked screen printing frames, they all hold different designs and have various names written on the frames like ‘native forest’.

“Helen and I create the ideas ourselves. But recently we’ve started working with a range of other New Zealand designers.”

“We want to be the first thing people think of when they want to buy a New Zealand wallpaper.”

The film shows a stack of wallpaper samples.

The credits show “Own your handcrafted wallpaper idea” and then show the Intellectual Property Office of New Zealand logo.

The idea is about having something that a person has actually touched and spent some time making… We almost see what we’re doing as artwork.

Ben and Helen Masters were on the hunt for distinctive, locally-produced, handcrafted wallpaper for their home. They struggled. “The interesting stuff was all being imported,” Ben says. “I was aware that, in the past, people had made wallpaper in a smaller, hands-on way in New Zealand. But no one was doing it anymore.”

With Ben’s background in fine arts and interior design, and Helen’s talent for crafting elegant things – primarily wines – the Martinborough couple thought they’d give it a go themselves.

They tested their skills at a weekend screen-printing course. Although aimed at making t-shirts and tea towels, not long rolls of wallpaper, the course was encouraging. The next step was to set up a workshop. “Because it’s a handmade product, there wasn’t a big capital investment required at that point,” Ben says. “Once you’ve got a couple of screens and a long table, you’re kind of away.”

So away they went – establishing PaperHands in 2009 as New Zealand’s only commercial producer of screen-printed wallpapers. 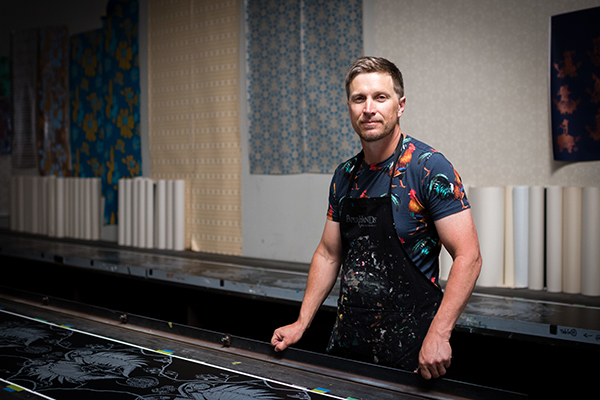 Ben Masters at work in his Martinborough studio at PaperHands Wallpapers.

The great pleasure of the work, Ben says, is in the physical process of actually making something. Every aspect requires careful attention, beginning with designing patterns that Ben says are “not necessarily too obvious and not trying to be traditional wallpaper.” He and Helen (who still works full-time as a winemaker) hand-sketch their designs. They use a computer only to check how a pattern might repeat or join up across the surface of a wall. The wallpaper designs are sketched before being translated into screens for printing.

With a design settled, the screens are made, colour combinations are trialled, and finalised options are added to their online catalogue and physical sample books.

While Ben and Penny are meticulous, minor variations inevitably occur during production. They see these as part of the wallpaper’s appeal, as with any handcrafted product. “The idea is about having something that a person has actually touched and spent some time making,” Ben says. “In a way, we almost see what we’re doing as artwork.”

Those finished artworks become statements of character in cafés, restaurants, and homes all around the country.

Ben and Helen learned the details of their craft by researching historical techniques, talking with overseas experts, and through trial and error at the printing table. They also formed a relationship with local large-scale manufacturer Aspiring Walls, who supply them with equipment, like trimmers and unwind stands, and base papers.

Even with this knowledge at hand, Ben says, “It takes four to six months of practice before you can print a roll without making too many mistakes.” Every order of wallpaper also brings its own challenges. “As soon as you change your ink or the paper stock, or change the pattern, they can do different things on the table.”

Their hard-won skills and small-scale setup have proven valuable in unexpected ways. The industrial machines that Aspiring Walls use are optimised for printing large volumes of wallpaper. So, for short test runs of new designs, they outsource the work to PaperHands as a cost-friendly alternative.

And in 2017, Resene approached PaperHands with a special request: reviving the renowned Mason Handprints label. Resene had bought the label in the mid-1970s, but retired it in the late-1980s as wallpaper fell, temporarily, out of vogue. Ben and Helen leapt at the chance to get involved. They’re using the same techniques, and the original Mason Handprint screens, with modern Resene paints, to give these classic patterns new life.

Digital artist Mitch Manuel also contacted PaperHands with an exciting opportunity. He offered the use of designs – inspired by traditional Māori and Cook Island forms – from his colouring books for adults. Together, Mitch and PaperHands have developed three of these into stunning hand-screened wallpaper patterns.

Choosing a brand name was straight-forward, Ben says. Their name captures their commitment to crafting all wallpapers by hand. The choice to register it as a trade mark was less clear. Ben and Helen had already been in business several years when a friend, who was setting up their own small business, recommended they register it.

In New Zealand, anyone can claim a sign as a trade mark by using the ™ symbol – but this will not prevent someone else from registering it for themselves. Registering a trade mark formalises your claim and establishes a legal date of ownership. Registered trade marks can be identified with the ® symbol.

Ben and Helen realised they should protect their brand name and the growing reputation associated with it. To start, they asked the Intellectual Property Office of New Zealand (IPONZ) for a trade mark search and preliminary advice. Fortunately, they found that their brand name was still available. They registered it with IPONZ as a word mark, which means nobody else can use the same word in any way for similar goods. The brand is protected as a trade mark, they registered the name as a word mark.

As artists and business owners, Ben and Helen appreciate the value of originality. The distinctiveness of their wallpapers helps define them as a creative brand. “The last thing we would want to do is get anywhere near anything that somebody else has already done,” Ben says.

In New Zealand, copyright is created automatically with original art works – everything from books, films, paintings, and software, to wallpaper patterns.

Copyright allows creators to control how they benefit economically from the work they produce. If the work is being commissioned, however, the creator may be compensated for their efforts, while the purchaser will own the ongoing commercial rights. The creator usually also retains the ‘moral right’ to have their contribution acknowledged, but this may be waived (say, when ‘ghost writing’ a book on someone else’s behalf).

With Mason Handprints, Resene own all the patterns, having purchased the rights to the IP in the 1970s. They commission PaperHands to do the work, and acknowledge them as the craftspeople behind the product’s modern-day incarnation. With Mitch Manuel’s artwork, PaperHands license this IP. They pay Mitch an upfront amount, plus a sales percentage of each roll featuring his work, and credit him on their website.

PaperHands see originality of expression as a big part of the renaissance in handcraft that’s occurred since the early 2000s. “It’s something we’ve bought into,” Ben says. With the love people continue to show for quality, quirky, sophisticated works – made with real care – there’s no looking back. “It’s great we can help keep the interest alive.”