History of IP in New Zealand

Only 20 years after the signing of the Treaty of Waitangi, a patent system was established in New Zealand. The Intellectual Property Office of New Zealand continues to support and encourage creativity, innovation and enterprise by:

1860: The first New Zealand Patents Act was passed allowing the Governor to issue Letters Patent. The patent petitions and associated public notices were administered by the Colonial Secretary.

1861: New Zealand’s first patent was granted to Arthur G Purchas and James Ninnis for: “An Invention for the preparation of the fibre of the Phormium tenax (flax) and other plants for manufacturing purposes”. See: WIPO Magazine article.

21 patent petitions were received that year.

1866: The first New Zealand Trade Marks Act was passed allowing the Registrar of Trade Marks to issue Registration Certificates. The legislation was largely based on the British Merchandise Marks Act of 1862.

1868: New Zealand’s first Trade Mark was registered in the name of JAS. Hennessy & Co. from France for “Brandy in bottles”.

1870: The Patents Acts of 1870 effectively established a Patent Office within the Colonial Secretary’s Office.

1883: The Patent Office came under the control of the Department of Justice.

1884: The Patents Act of 1883 came into force which formalised the patent application process and Patent Office structure, including the appointment of a Commissioner.

1890: New Zealand Design No. 1 was registered in the name of Siegfried Kohn of Wellington for a medal commemorating the 50th anniversary of Colony that was founded on 22 January 1840. The round medal design had images on both faces of the harbour and various vessels.

The first Annual Report from the Patent Office was published. 160 trade mark, 616 patent and 5 design applications were entered onto the IP Registers that year.

1891: Mr W H Hughes qualified and was registered as New Zealand’s first patent agent. Henry Hughes Limited was established in 1882 and is the oldest firm of patent and trade mark attorneys in New Zealand.

The New Zealand Gazette fortnightly supplement, entirely given over to the business of the Patent Office, began publication. 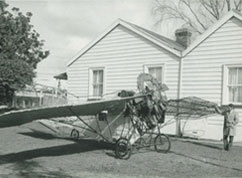 1906: NZ Patent No. 21476, titled “An improved aerial or flying machine”, was granted to Richard Pearse for his aerlion invention.

1911: Patent examination was widened to include investigating claim novelty and whether the claims were directed to “proper” or patentable subject matter.

1912: The iconic “Edmonds Baking Powder” Trade Mark (NZ Trade Mark No. 10823) was applied for and registered. You can discover how many times this registration has been renewed here: IPONZ Trade Mark Search.

War time provisions: During World War I and II, special legislation was passed to enable the Governor in Council to avoid or suspend registering Patents, Trade Marks and Designs from subjects of states at war with New Zealand.

The time periods in which to pay fees and for filing documents could be extended, if the applicant could show that they had been prevented from doing so due to circumstances arising from the war.

1922: The Patent monopoly maximum term was extended from fourteen to sixteen years.

1929: The Registrar of Patents became known as the Commissioner of Patents, Trade Marks and Designs.

1948: A considerable amount of public pressure calling for changes in Patent administration led to a Commission of Inquiry headed by the Solicitor General.

1953: New Zealand’s patent, trade mark and design legislation (Acts and Regulations) was substantially revised following the Commission of Inquiry and influence of the British patent law reform that had culminated in the United Kingdom Patent Act of 1949.

H J Gallagher invents a “wire-winding reel for electric fences” (NZ Patent No. 104134). Gallagher went on to export his electric fencing technology to the world.

1961: Bill Hamilton patented a craft fitted with a jet propulsion unit (NZ Patent No. 125495), and the modern day “jetboat” was born.
See: the NZ Post Clever Kiwi stamp has one of the patent drawings.

1977: The Patent Office was relocated to Lower Hutt from Wellington city.

1987: An amendment to the Trade Mark Act meant that the New Zealand trade mark classification schedule could now include service classes.

1994: The maximum patent monopoly term is extended from 16 to 20 years, and new rules and regulations are incorporated as New Zealand adopts the PCT International and National phase entry system and aspects of the World Trade Organization TRIPS agreement.

The legal definition of a trade mark “sign” is expanded to include colour marks like NZ TM No. 285611 [‘Cadbury purple’ for chocolate blocks, bars and tablets].

1997: The Patent Office became known as the Intellectual Property Office of New Zealand (IPONZ), and the 5 working day examination timeframe was introduced as a central IPONZ processing standard.

1998: The IPONZ website is launched with online Trade Mark search engine and provides some general information about application processes, forms and fees.

1999: The Trade Marks Act was amended allowing collective trade marks to be registered. A collective mark is owned by an association whose members use the mark to identify themselves with the product or service characteristic(s) set by that particular association. For example, a wine growers’ association collective mark where the wine is produced from grapes grown in a specific location.

2002: The IPONZ website self service facilities are expanded to include online trade mark application filing and patent, trade mark and design registration renewals.

2005: Introduction of the online correspondence filing facility for the IPONZ website.

2006: Record levels of IP applications were recorded in New Zealand and by the World Intellectual Property Organization (WIPO).

IPONZ moves back into Wellington city.

2009: ‘View IP History’ is added to the IPONZ website self service facilities giving authorised users (for example: an applicant or their patent attorney) secure access to their IPONZ case files.

2010: New Zealand becomes the first country in the world to have a national curriculum IP teaching professional resource – Creative Directions.

2011: An amendment to the Designs Act sets out the circumstances and procedure for restoration bringing the design legislation inline with other registered IP assets.

The Major Events Management Act 2007 provides a new layer of protection for major sponsor IP owners to combat unauthorised exploitation or ‘ambush marketing’ at major events such as the Rugby World Cup 2011.

New Zealand acceded to the Madrid Protocol relation to the International Registration of Trademarks.

New Zealand ratified the Singapore Treaty on the Law of Trademarks.

2017: The Patents (Trans-Tasman Patent Attorneys and Other Matters) Amendment Bill commences on 24 February 2017. Its key changes include the establishment of a single trans-Tasman patent attorney regime.

New Zealand’s IP Registers are a valuable source of historical and technical information. Archives New Zealand’s collection includes patent records from 1861 through to fifty years before today. Information about applications and registrations made within the last fifty years can be assessed using the IPONZ online search engines. New Zealand Acts, Bills and Regulations are available via the Parliamentary Counsel Office websites.