COVID-19 update: Our services are available as normal. Find out more about applying for deadline extensions, and remote hearings.

In the very early morning Wellington Harbour sparkles with reflections from the lights of the city. The opening title says “Dream it. Do it. Own it.” Mood music plays.

In the suburb of Berhampore the only building with it’s lights on, is a small shop on Adelaide Road. We can see bakers moving in the back as we look through the window.

The narrator says “Hi. My name is James Whyte, owner and operator of Baker Gramercy.”

“Gramercy means ‘great thanks’. Gramercy is also a suburb in New York city, where I completed a culinary course”

You see flour being spread over a table full of loaves of bread, waiting to be baked and glazing being brushed onto pastries.

“We created the brand then registered the trade mark. We registered our brand through an IP attorney.”

A tray of freshly cooked croissants are removed from an industrial oven. James lays out trays of baking on the shop counter.

“The trade mark is important to protect the value in our brand. Slow food from my point of view is allowing the natural fermentation and the ability of product to fully mature and develop. We’re about taking long cuts not short cuts.”

You see the counter person as she makes up a customer’s order with a croissant in a paper bag and completes an espresso coffee.

“People respect the hand crafted nature of what we do. “

You can see the bakery team, gathered at the counter sharing a conversation.

“We’re a bit obsessed with quality. The future of Gramercy involves sustainable growth, sticking to our core values.

James loads freshly cooked loaves of bread onto a display tray. The final titles are “Own your artisan baked idea” and then the Intellectual Property Office of New Zealand logo.

If you’re trying to create something, at least protect it. You never know where it might lead.

James Whyte was working in commercial real estate, based out of the United Kingdom, when the global financial crisis hit. “The world went pretty crazy,” he says. “Everyone was on shaky ground and I thought, ‘I’m not going to hang about to see where this mess ends.’”

James saw it as an opportunity to change tack and embrace a lifelong passion. He jumped across the pond, landing in the Gramercy neighbourhood of New York City, and enrolled in culinary school.

A couple of years later, James put his culinary skills to use back home in New Zealand, fulfilling the dream of setting up his own eatery. Surveying the Wellington food scene, he spotted a niche. “At that point, there weren’t a lot of handcrafted, batch-made artisan breads available. So I took another giant leap.”

James opened the doors of Baker Gramercy in March 2014 in the suburb of Berhampore. The small bakery quickly built a big reputation, and helped lead the neighbourhood’s transformation into a foodie quarter. 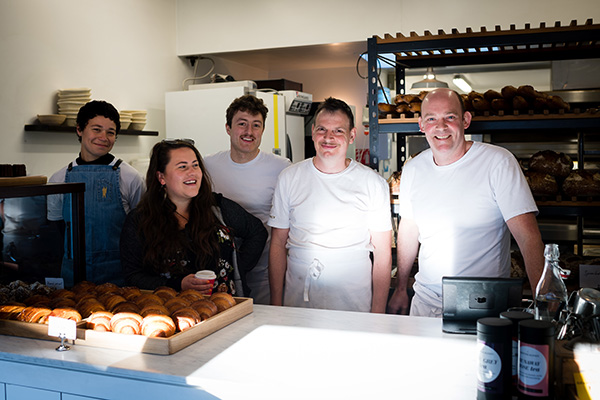 Quality ingredients and handcrafted methods are at the heart of this bakery.

A typical work day begins at four in the morning. James, also a father of three young kids, says the early starts can be tough, but they’re worthwhile. It means he and his team can offer customers the freshest goods possible. “We don’t bake a day in advance or even six hours in advance. We want you to eat our breads the day they are baked and devour our croissants straight from the oven.”

In winter, customers escape the chilly mornings, into the oven-warmed, kitchen-and-counter storefront of the bakery.

For James, there’s the artisan’s pleasure of creating “handcrafted goods of character,” as the bakery’s motto goes. But also, James explains, “If you’re making something or creating something, you can always supply customers and businesses, and have different forms of revenue coming into your business.”

At Baker Gramercy, that means diversifying the types of goods baked and who they’re sold to – over the counter to customers and wholesale to other businesses. 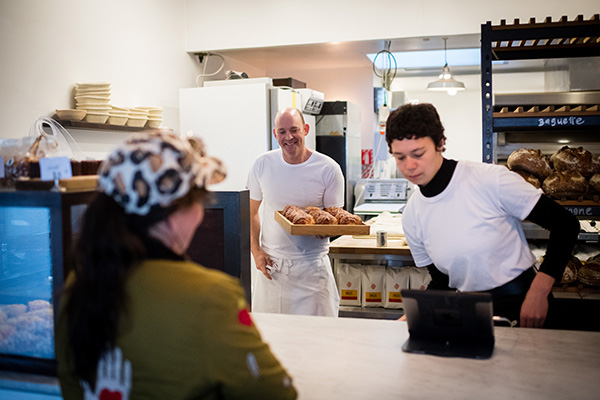 The bakery is infused with James’s personal style. With his recipes and techniques, James draws on international cuisine, “without being defined by anything.” The name Gramercy recalls those formative months spent in New York City.

Gramercy is also Old French for “great thanks” and an expression of wonderment. It evokes the kind of response James hopes to inspire in his customers – when they bite into one of his hugely popular, and perfectly flaky, hot croissants, for example.

The store’s design is also inspired by the inviting openness of eateries James visited in New York City. “Nothing’s really hidden,” he says. “There’s a baking table right in front of you, when you’re at the counter. The bakers are there, the ovens are there. There’s a sense of authenticity, when you walk in and you’re at the counter but also ‘in the kitchen’.” 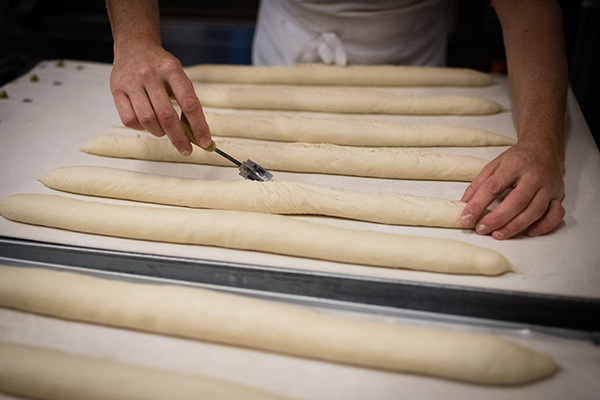 Everything is made on work tables just behind the counter, fresh every morning.

James tackled the question of his bakery’s identity in-between fitting out the shop with everything a good baker needs and opening the doors to his first customers.

He decided to use ‘Gramercy’ as his trade mark name, with ‘Baker Gramercy’ as the trading brand. “The theory was to have the ability to apply the trade mark – and the strength of the brand – across different ventures.”

With those future opportunities in mind, James hired an intellectual property (IP) attorney to conduct a thorough trade mark search. Nobody else had claimed ‘Gramercy’ within the New Zealand food industry, so James instructed his IP attorney to register it as a word mark in several food industry classes. A word mark prevents competitors from using the word ‘Gramercy’ in any way – even as part of a logo or image.

“It works both ways,” James points out. “You’ve got to make sure you’re protected and you’re not encroaching on somebody else’s trade mark.”

James is sympathetic to those who put off registering their trade mark, when faced with all the costs of setup and nothing coming in the door.

“But if you’re trying to create something, at least protect it,” he advises. “You never know where it might lead – there might be additional value in the brand. It might be that one day you try and sell your business and find out, ‘Oh, it’s not quite as valuable as I thought it was, because I didn’t have it protected.’ So you might as well take that step.” 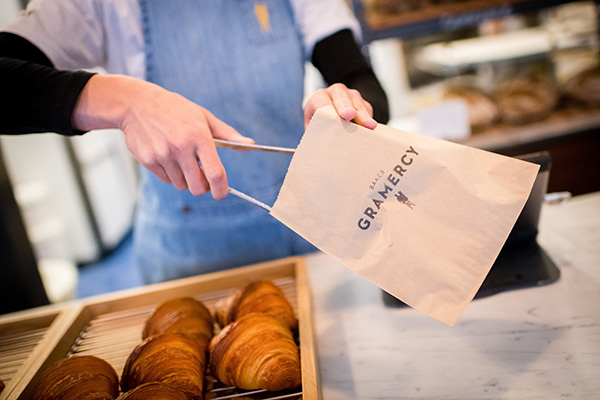 The brand is protected as a trade mark, they registered the name as a word mark.

With his word mark sorted, James was safe to hire a designer to develop the branding – everything from a website to uniforms and storefront signage. As James puts it, “You don’t want to go through the branding process – doing all that work and spending money on your design – and find you can’t use it!”

Central to the bakery’s brand are the authenticity and character of the food. While the best way to experience this may be in-store, James knows he also has to tempt the taste buds of customers from afar.

All of this imagery has automatic IP rights under copyright law. Because there’s no need to apply for copyright in New Zealand, James can keep spontaneously serving up his visual treats under his brand name.

Baker Gramercy’s reputation has its customers queuing in Wellington’s brisk weather, catching the scent of hot bread on the wind, as they wait for the doors to open.

It’s a valuable reputation, born of hard work and high standards. “If you compromise, you dilute the effectiveness of the brand. We’ve always been sticklers for quality,” James says. “I heard a quote once, about taking long-cuts not short-cuts. That pretty much sums up what we do.”

Taking long-cuts means investing in a top-performing team, and James credits his staff as the most important part of his business. On-the-job training is critical, alongside encouraging staff to keep learning and bringing new ideas in. With all that valuable knowledge around the baking table, James says, “You do your best to keep hold of the people you’ve got.”

As James has found, having a resilient team is vital when business is booming. Those hot croissants in particular are a bigger drawcard than he might have imagined.

“We’ve been increasingly busy on Saturday mornings,” he says. “It does create a bit of extra stress, but it also creates quite a buzzy atmosphere. It’s become part of people’s weekend to pop down and get their weekly fix. It adds a degree of excitement, certainly for us and hopefully for our customers as well.”

Give feedback about case studies